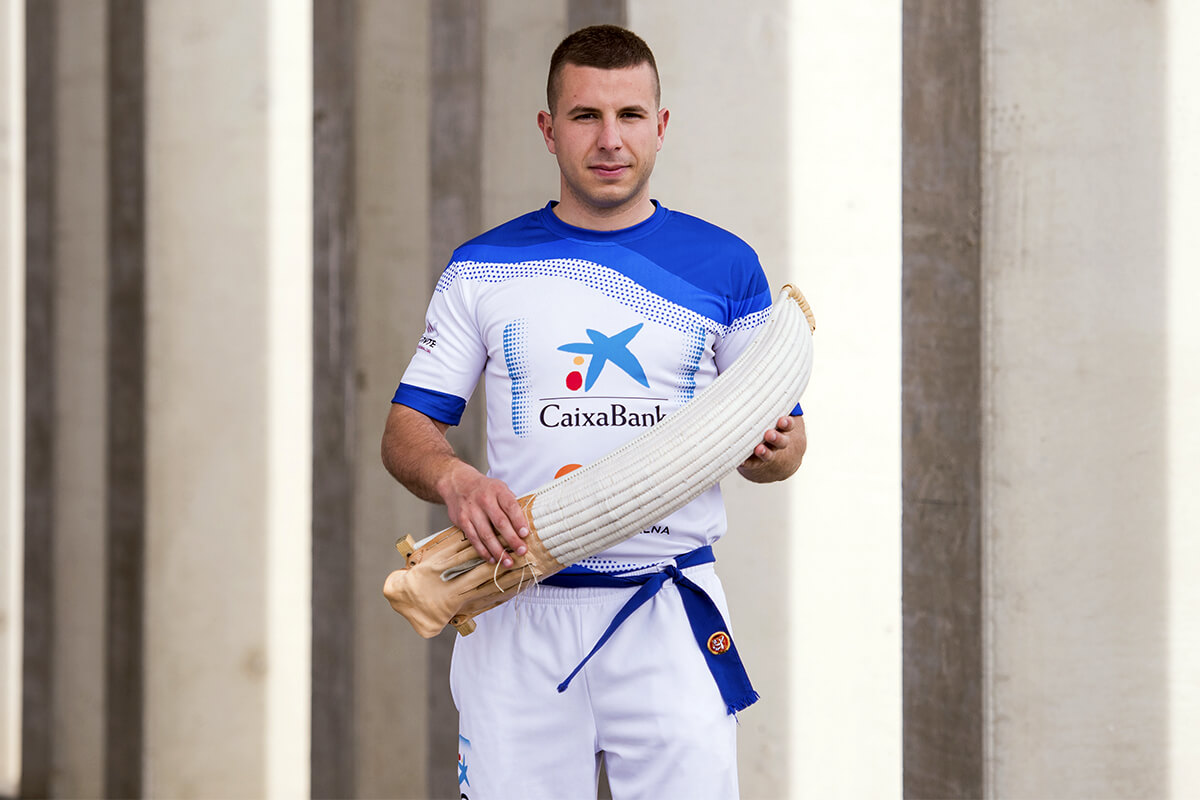 Interview with our industrial director Ibai Barricart in Navarra Capital

At 26 years old, the Bigüézal remonitor is industrial director of the Navarran firm Plastic Repair System. Before making the leap to this company, he worked in the El Dolmen de Faulo pizzeria, run by his family and a partner and located in his hometown. In fact, his first project as an engineer was to design the furnace, to which he added a patented heat recovery unit with a double purpose: to triple the production capacity and to use the temperature of the furnace itself to air-condition the establishment and its house. In this CapitalTest, he also tells how he landed in engineering by chance because his initial intention was to study Physical Activity and Sports Sciences.

The speed of the ball, the speed of the game and the immediate reaction capacity to hit a ball that reaches up to 200 kilometers per hour. That is what Ibai Barricart likes most about his sport, the ski lift. A discipline that requires great concentration, dedication and a lot of training.

The 26-year-old Pelotari from Bigüézal also offers the best version of himself beyond the fields. He first worked in the family business, the El Dolmen de Faulo pizzeria, located in his town. And, since the beginning of the year, he is the industrial director of Plastic Repair System.

As he tells in the following CapitalTest, he has always been interested in caring for the environment and optimizing resources. He even designed a model of heat recovery, of which he has the patent.

1. Your first steps as a remontista…
I started at the Remonte Euskal Jai Berri Foundation school, in Aoiz,eleven years ago. I stood out with Mikel Otano and we went to train at Euskal Jai. Everything started to be more serious, they gave me a physical trainer, we reached a higher level and, in 2016, I made my professional debut at Galarreta.

2. But he changed companies…
Last year, in January, a new project more focused on Navarra emerged. Some remontistas decided to change companies. We pass from Oriamendi a e-Remonte. We are seventeen remontistas. It is a different proposal. We move through Pamplona and the nearby towns, they are less kilometers and they offer me the opportunity to play more regularly. I am very happy because we are increasing the level.

3. As soon as the project started, the pandemic arrived. How did it affect e-Remonte?
The closure of the hotel trade and the restriction of capacity has mainly affected minority sports. Between the respect that the situation gives and the limits set by the circumstances, the project stalled a bit. But in June of last year we started to play regularly in several Navarrese towns. There is more and more movement and the presence of fans.

4. Do you have sponsors?
In the foundation we have the sponsorships of CaixaBank, Magna, Gobierno de Navarra and Navarra Televisión, which broadcasts some festivals. And, above all, behind the progress of the project are the municipalities. They are of great help for schools and all grassroots sport. They give us the facilities to train and play. If it were not for them, we would not have that facility to be able to move from one town to another.

5. The remonte is not the only thing you have taken to the villages. You have also brought a piece of Italy to one of them …
(Laughter) Yes, to Bigüézal. Since we were little, having part of the family in Italy, we have always made pizzas at home. Our dream was to have our own wood-fired oven and, in addition, my father had always wanted to start a hotel business. In the winter of 2016, he settled the idea together with a partner and that’s where El Dolmen de Faulo was born. It started as something more private, but in the end we began to work for the people of the town, the valley … The pizzeria was gaining more and more fame and now people from all over Navarra are coming.

6. It was his first contact with the world of work outside of the frontons.
Yes it was. For four years I combined work in the pizzeria with my studies and the ski lift, as I was going to and from Hernani. In March of this year I had to leave it because I cannot combine it with my current job.

7. Talk about your studies, what is your training
?I studied Industrial Engineering at UPNA. I was doing the final degree project in Bulgaria for five months. A very nice experience. To close the training cycle, I also did the master’s degree in this same branch and I left to do my final master’s thesis, on that occasion to Italy. And, from there, in 2019, I did several projects on my own.

8. Among them, one especially important …
The oven in the pizzeria is its own design. We did a study, we looked for suppliers and we made it to measure for us. We use the temperature that it reaches when making the pizzas to air-condition the place.

9. How did this idea come about?
There was an increasing workload and the oven we had was not coarse and did not adjust to the cooking times. After many sketches, my father and I came up with a design that was much better suited to the needs of the kitchen. We have tripled the capacity to cook pizzas with an oven that is much more stable and that optimizes resources.

10. It even has its own patent …
Yes, in 2019 I did my own development of a heat recovery model. We also manufacture it and have applied it to this oven. It consists of taking advantage of the hot smoke to heat clean air and to be able to air conditioning. With new integrations we have also managed to heat the house. We did a lot of testing and I was able to do my own utility model report. I started developing the project when I finished my degree. I had the concept in mind and, with the help of a university professor, I was able to define it and we manufactured it. The invention, by itself, can heat up.

11. And the leap into the world of work as an engineer arrived …
The first company I worked for was rubber machining. I was there for six months. Being in the chemical industry, I was fortunate to continue working despite confinement.

12. How do I get to Plastic Repair System?
I felt the need to continue growing as a professional. In July I did my first interview with this company. After the selection process, I started working as a technician in mid-August 2020 and, in February 2021, I became an industrial director.

13. Tell me about that transition …
I put in a lot of effort and work. The enthusiasm and illusion of wanting to learn and keep moving forward paid off. Little by little I was improving and they offered me the position.

14. What do you like most about engineering?
I decided to rebound, I wanted to do the degree in Physical Education and I did not enter because he did not give me the grade. I looked at what could be studied in Pamplona and what caught my attention was the name of the degree. I came from Biology, but based on dedication and hours of study I managed to get engineering. Without a doubt, I would repeat it.

15. And what about your day to day at Plastic Repair System?
That work is very varied and changing. It is about trying to coordinate and plan the four workshops that we are directly in charge of: Pamplona, Lleida, Valencia and Mexico, in Puebla. Our task is based on planning tasks, tracking deadlines, coordinating deliveries, supervising… that everything fits together and there are no unforeseen events in the workshops.

16. It is a reuse company based on sustainability, like the oven …
The truth is that renewable energy and taking care of the environment have always aroused interest and curiosity in me. Unconsciously, everything is related to the issue of sustainability and value for money. Both the pizzeria and my job. At Plastic Repair System, we fully embrace the circular economy. We repair plastics used in industry, pallets, containers … The idea is to extend its use.

17. What savings does it mean for companies?
They save 70% by reusing plastic instead of having to buy a new product. And it is just as functional.

18. What about what cannot be reused?
We are within the three ‘R’ of the environment: reduce, reuse, recycle. Our activity is framed in the reuse phase, and what we cannot repair goes to recycling

19. Now, to improve traceability, they put chips on the products…
It is already underway. We have participated in the Horizon Europe 2020 (H2020) program. We present a proposal for improvement projects, of which I have taken part. And, thanks to the grant they gave us, we had the option of allocating resources to this type of action. With these chips we guarantee a much better traceability. The objective is to have everything linked and provide information to the client.

20. What other projects do you have in the development phase?
We have created an artificial vision system. We are in full operation and we hope to have it operational shortly. Specifically, it is a machine that scans the product and tells us if it is repairable or not. This type of program allows us to differentiate ourselves from the competition.

21. Sustainability is at the center of the agenda for administrations and companies. But much remains to be done. How do you see the future of the planet?
With the 2030 agenda, we hope that there will be more and more multinationals with which we work and collaborate. Since we started in 2011 we have repaired around 9,500 tons of plastic, which represents a saving of 40,000 tons of CO2 emitted into the atmosphere. It is estimated that the repair of each kilo of plastic emits 187 times less CO2 than the production of a kilo of new plastic.