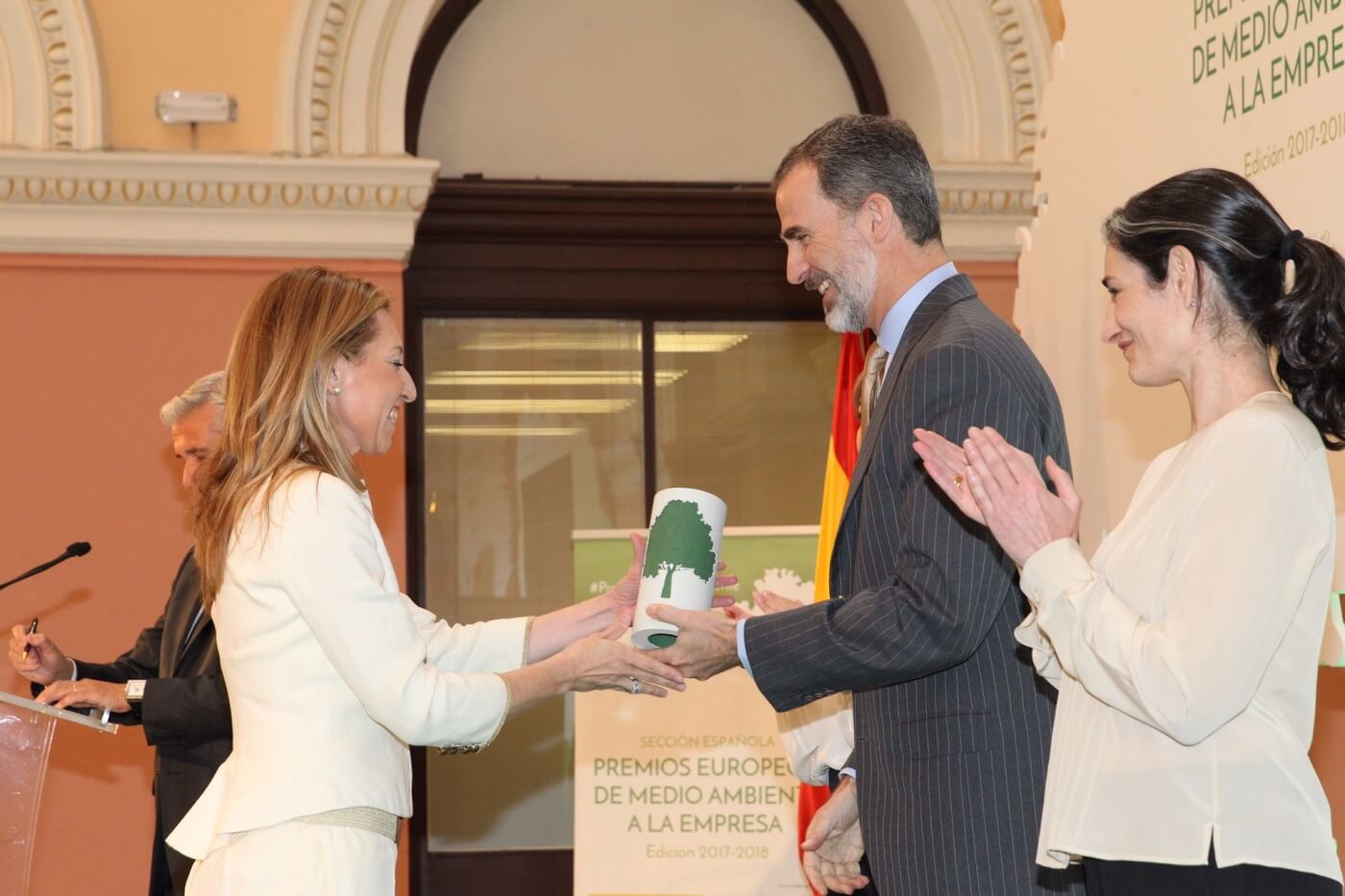 PRS receives the European Award for the Environment to the Company in Spain from S.M. the king

Plastic Repair System has obtained the first prize in the Product Service for Sustainable Development category for implementing a representative circular economy technology that allows the reuse of plastics through repair.

Thanks to this recognition, PRS will participate in the European phase whose ceremony will take place on November 14 in Vienna.

The Navarran company Plastic Repair System 2011 S.L. has been awarded the European Business Award for the Environment in Spain in the Product / Service section. It is the highest distinction awarded in Spain in this matter and is managed by the Biodiversity Foundation of the Ministry of Agriculture, Fisheries, Food and the Environment. This award, to which a total of 78 companies have been presented, represents an important recognition both from society, as well as from the world of business and sustainability.

The awards ceremony took place coinciding with World Environment Day, which this year is celebrated under the slogan “A planet # Without Plastic Pollution”. A campaign that urges governments, industry, communities and individuals to come together to urgently reduce the production and overuse of disposable plastics that pollute our oceans, harm marine life and threaten human health.

During the event, chaired by His Majesty the King, and also attended by the acting Minister of Agriculture, Fisheries, Food and Environment, Isabel García Tejerina; the General Director of PRS, Laura Alba, has highlighted the importance of the commitment to the circular economy: “We have lived through times of waste and waste of waste. A linear system of resource extraction, manufacturing, use and disposal. But resources are limited and migration to a circular economy system is presented not as an alternative but as a pressing need. “

King Felipe, in charge of delivering the awards, congratulated the companies for “promoting new business strategies and for betting on a new business approach where the environment plays a leading role.” To all of them, he added, “I invite you to play your role as ambassadors of the environment among the Spanish business fabric, being a reference and source of inspiration for many other companies in our environment.”

PRS is a pioneer company with more than 7 years of experience in the repair of goods made of plastic, extending their useful life, through a certified and patented thermo-welding method. Thanks to this service, PRS customers recover 100% of the functionality of the repaired object, also benefiting from an economic saving of 70% and a reduction in the carbon footprint of at least 98%.

In 2017 alone, PRS repaired more than 100 different products such as: pallets, boxes, containers, tanks, kayaks, etc., which in total amounted to more than 1,263 tons of recovered plastic, which represents a CO2 retention of more than 1,126 tons. In addition to being responsible for the environment, PRS has also acquired a commitment to society, aimed at contributing to a more equitable community. Through its network of workshops, Plastic Repair System 2011 S.L. It helps people with disabilities in their work integration and, in this way, improves their quality of life. It should be noted that of the 20 PRS workshops, 8 are special employment centers.

Plastic Repair system 2011 S.L. It has a portfolio of more than 200 clients, among which are multinationals such as Chep, Crown, Benteler, Mahou, Ball or KYB. Some of these clients with plants in several countries have requested their service in other plants in Europe and even outside Europe. Currently PRS repairs for clients in Spain, France, Germany, England and Turkey and at the same time is carrying out an internationalization plan in order to extend the network of workshops to other countries both inside and outside the EC.

In the Management for Sustainable Development category, the following have been awarded: Iberdrola as a large company, Biotechnology Laboratories as an SME and Consum S. Coop has also obtained a second prize. V.

In the category, Product / Service for Sustainable Development, the Navarran company Plastic Repair System 2011 S.L. has obtained the first prize, for launching a representative circular economy technology that allows the reuse of plastics from repair. In this category, UTE Cirtec and Sistemas Urbanos Drenaje Sostenible S.L. have received two second prizes.

In the Business and Biodiversity category, the first prize went to Suez Spain and second prize went to LafargeHolcim and Red Eléctrica de España.

The European Business Awards for the Environment have been convened since 1987 by the European Commission to recognize those companies that successfully combine the economic viability of their businesses with the protection of the environment. In this edition, 78 nominations have been submitted. All of them represent a wide range of sectors of activity in the Spanish economy, such as energy, food, industrial, services and consumption, among others. There is also a significant representation of companies that provide innovative solutions for the circular economy.

The jury, made up of 11 experts in sustainability and business, has valued the high level of innovation and technological development of the initiatives submitted to the different categories of the contest, which allow recognizing business management initiatives for sustainable development, innovative products and services, as well as business processes and projects that promote sustainable development. Initiatives that demonstrate an economic activity compatible with the conservation of biodiversity also stand out.

The companies awarded in this Spanish Section have access to the European final, competing with the rest of the winning companies in other member states of the European Union and candidate countries. The winners of this final will be announced on November 14 in Vienna (Austria). [:]